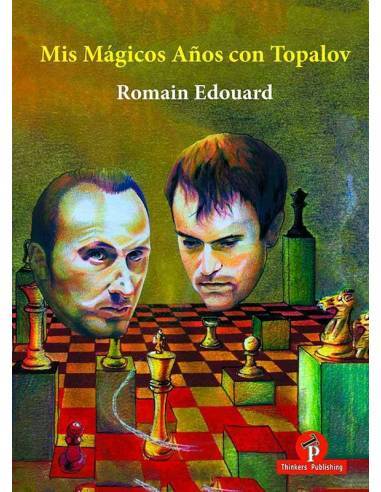 In my experience, regardless of playing strength, a young player willing to work is more valuable than a renowned but unmotivated one. Then I personally met Romain during the Chess Olympiad held in Khanty-Mansiysk and we agreed to a training session in Salamanca.

In the second half of 2010 my manager Silvio Danailov informed me that he had received an email from a young French GM offering his cooperation.

We asked him to send us a sample of how it worked, an analysis of any opening variant. Romain sent us a file with an improvement in the Najdorf that I liked.

In my experience, regardless of the playing force, a young player willing to work is more valuable than a renowned but unmotivated one. Then I personally met Romain during the Chess Olympiad held in Khanty-Mansiysk and we agreed to a training session in Salamanca.

Looking back, I would say that our first sessions were the most fruitful. It stands to reason that this was because in 2010 it was easier for humans to find good ideas faster than analysis engines than in 2014. In the same way it is in 2018 with respect to the years to come.

Of all our findings the one that makes me most proud is the move 14.Ba4! staged against Nakamura during the Melody Amber rapids and blitz tournaments in Monaco, a very profound idea that was well developed by Romain. Many lines full of beauty remain to be revealed.

There is also the strong innovation 12.Ne5! from the last round of the same tournament against Aronian that left me with a great advantage although I finally ended up losing. The quality of the work of the coaches or seconds often has nothing to do with the end result.

I do not think that they are responsible for what happens during the time trouble in a blind game or in the fifth hour of play of a tense and prolonged fight.

It was also very significant that we were fortunate enough to anticipate the new move 9.v5 !? carried out by Morozevich in Zug, 2013, whose knowledge allowed me to achieve an important point. What otherwise must have been a fresh and original idea ended up being a fiasco for my rival. Another excellent discovery in Lanzarote was 9.Be5 !, played against Kramnik. This surprise allowed me to gain a huge advantage a few moves later, something almost impossible in an opening as well analyzed as the Lady's Gambit.

There were many other improvements and some of them still haven't seen the light of day. Our last serious training occurred in the winter of 2014 when I was preparing for the Khanty-Mansiysk Candidates Tournament.

I consider that I prepared myself well; But the problem was that the results came long after they were needed. However, as I have already said, I do not think, for example, that Romain should be blamed for my defeat against Svidler with the black pieces. We found a great idea, revived a line with a bad reputation, and left the opening with an advantage only to completely spoil it and lose.

As a result the Candidates was a disaster for me; But I would say that my good subsequent game in the rest of 2014 and 2015 was largely due to the work done in Lanzarote in the winter of 2014. For example, the new move 7… g5!?, which gave me the victory over Carlsen in San Luis a year and a half later in 2015, was prepared back then. In June 2014, Romain crossed the 2700 barrier. I want to think he did it because he worked with me and not because he stopped doing it.

This book is about how ideas come up during preparation, about what happens behind the curtains. I was not aware of his plans until Romain told me he was writing it. I think chess enthusiasts will appreciate the honesty of the stories as nothing was hidden. I hope you enjoy. ~ Veselin Topalov Salamanca, October 2018.