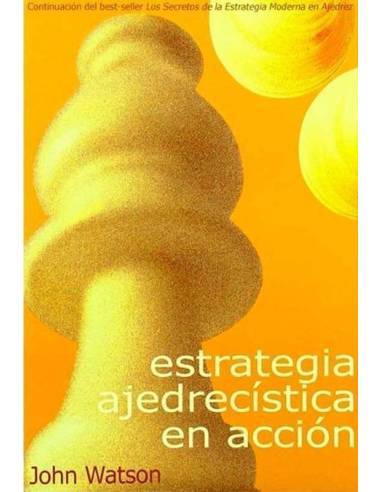 In his celebrated book The Secrets of Modern Strategy in Chess, John Watson opened new horizons in describing the evolution of chess strategy since Nimzovich's time.

In his celebrated book The Secrets of Modern Strategy in Chess, John Watson opened new horizons in describing the evolution of chess strategy since Nimzovich's time.

The author explained that current players are more inclined than their predecessors to give priority to dynamic factors over static, and how they have progressively transcended the limited "rules" that have conditioned the game in earlier times.

The dominant results of Gari Kasparov and the emergence of a new generation of super-great masters testify to the effectiveness of this dynamic and broad-minded philosophy, which has enriched modern chess.

In this new work, Watson develops his theory and extends it with the study of new areas. Thus, it illustrates the modern practice of chess with numerous examples of imaginative players like Kasparov, Kramnik, Anand, Ivanchuk, and impetuous innovators like Shirov and Morozevich.

Those who have enjoyed the secrets of modern strategy in chess will enthusiastically receive this book, which clarifies important concepts.

Chess strategy in action can also be read as an independent book, while it contains an outstanding collection of modern games, commented on with deep and revealing reflections.

International master John Watson is one of the most respected chess authors.

His overwhelming four-volume study of the English Opening consolidated his reputation in the 1980s, and has since published a number of high-quality books.

In 1999 The Secrets of Modern Chess Strategy won the British Chess Federation award for best book of the year as well as the Fred Cramer Award from the United States Chess Federation. Among his students is the 1997 World Youth Champion, Tal Shaked.