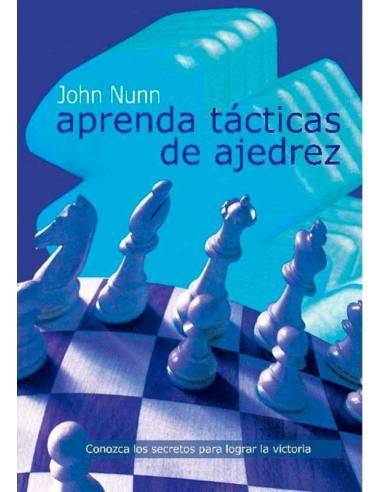 Know the secrets to victory.
Once the player learns the basic rules of chess, the next step is to study tactics.

Once the player learns the basic rules of chess, the next step is to study tactics.

The knowledge of the tactic will allow the beginner to start winning games, giving mate or capturing the opposing pieces.

As the player progresses, his tactical arsenal will be enriched and he can begin to make sacrifices and combinations. Improving tactical ability is the most efficient way to win more games and also gain confidence before the board.

Given the fundamental importance of tactics, it surprises the scarce number of books that teach it systematically.

As a result, many players suffer from tactical gaps that plague them throughout their career.

The step-by-step approach employed in this book ensures that each concept is explained and verified before moving on to the next.

The author, known for his great tactical ability, guides the reader to understand the key tactical ideas, such as double attack, dunk, attack discovered and others, debating general ideas such as destruction of defense and forced variants.

No prior knowledge is required except that of the basic rules of chess. Throughout the book are included many graded exercises to check the level of understanding of the reader. John Nunn is a well-known English Grandmaster, who has won four individual gold medals and three collective silver medals in different chess Olympics.

In the World Cup 1988-89 finished sixth, ahead of several world champions.

Possibly the most prestigious chess author in the world, and two of his books have been awarded by the British Chess Federation as the best book of the year.
Traductor de Google para empresas:Google Translator ToolkitTraductor de sitios webGlobal Market Find