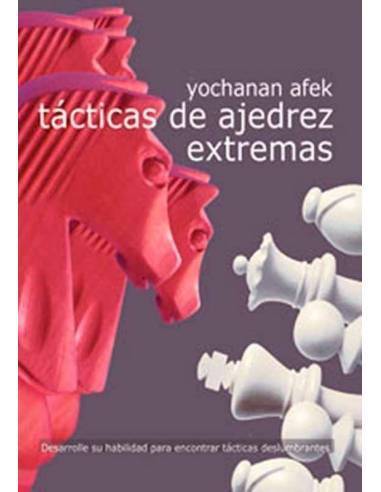 This book includes positions of study and real games. The study positions, where all the pieces have a function, show the tactics in their purest form.

This book includes positions of study and real games. The study positions, where all the pieces have a function, show the tactics in their purest form. This purity allows us to concentrate exclusively on the key ideas of the position and makes these exercises an excellent learning tool.

Yochanan Afek is one of the great experts in the world of compositions and is the perfect chess player to select the best studios for this purpose. In real games, tactical ideas are usually less complex, but more difficult to identify.

This book allows the reader to become familiar with these theoretical tactical ideas so that their application in practice is easier. An example of this is provided by Afek in the introduction, where a dazzling final play of a game of the 2016 world championship would not have gone unnoticed by those who knew the subject.

All the real positions in this book were taken from games played by world, male or female champions.

Following the structure of John Nunn's best-selling book Learn Chess Tactics, The House of Chess 2010, in each chapter a tactical theme is introduced and a number of examples explained.

Then, the reader should use this knowledge to solve carefully selected series of exercises. Yochanan Afek is an international Israeli master expert, composer, coach and international referee. He has written, in collaboration with Emmanuel Neiman, The invisible moves in chess, The house of chess 2011.