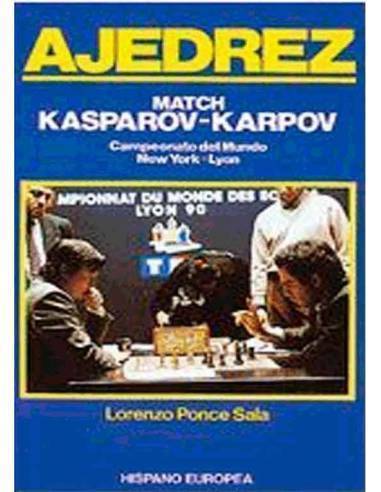 We will not emphasize now recognized merits of Lorenzo Ponce Hall in the chess world, but if your love for the sport has not been allowed to remain indifferent to the match Kasparov and Karpov in late 1990

We will not emphasize now recognized merits of Lorenzo Ponce Hall in the chess world, but if your love for the sport has not been allowed to remain indifferent to the match they have played the great masters Kasparov and Karpov in late 1990

The 24 games that both champions have played in 2 stages are as different as New York and Lyon are thoroughly discussed in this book, step by step, by Ponce Sala; comments, with full knowledge of the game, take us back both items previously decided by both contenders, either in this competition or in previous confrontations, as the disputed previously by other great masters, deriving them prosecutions of items that have been perhaps more adjudicative after a calm analysis naturally.

This confrontation has been surrounded by an inevitable political tension, and while in the US the media were clearly inclined in favor of Kasparov - declared anti-Gorbachiano (we should not forget that it is Azeri and has put on sale the Trophy Korloff, won in the competition to dedicate the amount to the needy of Azerbaijan and Armenia) and North America have not forgotten that their champion Fischer was deposed in 1975 in Manila, serving on its world champion for a federal decision in favor of Karpov in France tendency of the latter he said.
Ponce Chamber has reflected these pressures as the American and the European Series, collecting comments both great teachers in rival political principle, they have engaged each other.

Political preferences, whether the applicant champion or not obviously constitute the background of this work. On the contrary, the amateur sport reader will be pleased with the descriptions of the plays that have been made and the comments that Ponce has dressed the room.

The positions of items in its key moments have been sketched graphically, reflecting on the boards as the respective pieces were located, especially in decisions tables or avandono.

The true fan will enjoy seeing as it has reached the ajustadísimo outcome of this competition, not in vain is a confrontation between two true champions who have shown how exciting can become the sport that draws a huge amount of practitioners.

In this work the author analyzes and thoroughly discusses the twenty items that the two chess champions competed for the world championship New York - Lyon 1990.