In contrast to the constant evolution of chess opening theory, that of the end is much more durable. If we refer to the basic end, is almost unchanged.

In contrast to the constant evolution of chess opening theory, that of the end is much more durable. If we refer to the basic end, is almost unchanged. So once "good" will be learned in the knowledge that we can rely forever. Most players have deficiencies in their understanding of the theoretical end and this affects the outcome of their games, and in the general development of his game.

The new time rhythms that do not allow all the subtleties of a final, during the game, aggravating the situation for players who do not have strong prior knowledge.

This book will be of great help to all who want to solve this problem, and with it, the author debunks the myth of the complexity of endgame theory.

The final "must-know" are relatively few. Here we selected 100 that the author has considered most useful. Through detailed explanations and entertaining, using many images, offering lots of simple rules and clearly summarizing the most important knowledge, there is no doubt that the reader will improve the outcome of their games.

"The 100 end there is to know" not intended to be an encyclopedia, covering all known and serve as a final query, if not a practical tool that will improve the understanding of the theoretical end to occur more often in the game alive.

When we play a final, our thoughts are directed to reduce it to a known position. If we have a good base and a solid understanding of these positions, our chances of success will be much greater.

The success of the first edition, which sold out quickly, has encouraged us to improve the book and launch the second edition you hold in your hands.

It has been corrected the errors that have added new examples and more detailed some positions explanations and has increased the number of exercises, which should help the reader to check their understanding of the end and let you know which are those require a new review. 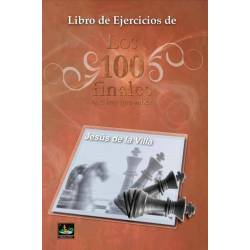