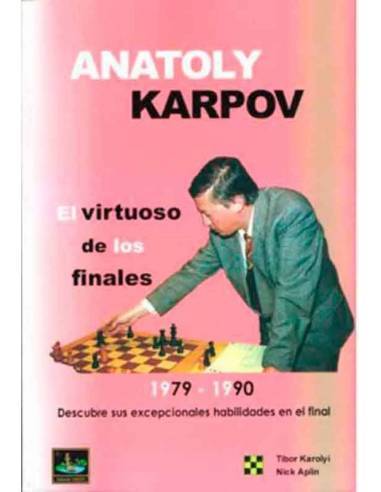 Selected for the two volumes that make up this collection are highly instructive games and are an excellent school for chess competition.

Anatoly Karpov is the most outstanding in the most technical stage of the game chess player, the end.

Selected for the two volumes that make up this collection are highly instructive games and are an excellent school for chess competition.

This second volume covers the period of its consolidation as a world champion after defending his title against stateless person Viktor Korchnoi, his second title defense in 1981, against the same opponents, and all their matches for the world title against new Soviet star, Garry Kasparov.El look at this part of history and of these World Championships will be extremely interesting to the reader.

Virtuosity Karpov in the final is captured through this work, an excellent job of its principal author, MI and Hungarian coach Tibor Karolyi, Crumbling anthological games, discover great ideas and refutes comments and analysis of the biggest players, as of Karpov and Kasparov himself.

Every end is a masterclass in a true virtuoso, thanks to the clear teaching of the authors. It is carried out for the first time, a look with magnifying glass to technical legendary Karpov, explaining their best weapons and abilities.

Before each game, the author brings us closer to biographical data Karpov's career. At the end of this volume we have also classified the different themes and types of selected end.

A book that has received considerable international criticism and was considered Book of the Year in 2007 by the jury of both The Guardian and the British Chess Federation. "Karpov's ability to extract oil from a desert is well known, and Karolyi makes a serious attempt to understand the secret of success of Karpov. As a result the reader simultaneously instructs and entertains"

"A real contribution to literature in chess, even a classic. Examples include an extraordinary number of great ideas. I recommend this book without reservation" John Watson, The Week In Chess

"Excellent, a must for all chess lovers" GM Paul Motwani, The Scotsman

Tibor Karolyi is International Master, former champion of Hungary and an experienced chess coach (Peter Leko is his outstanding disciple). Nick Aplin is Associate Professor of Sports Studies at the National Institute of Education.