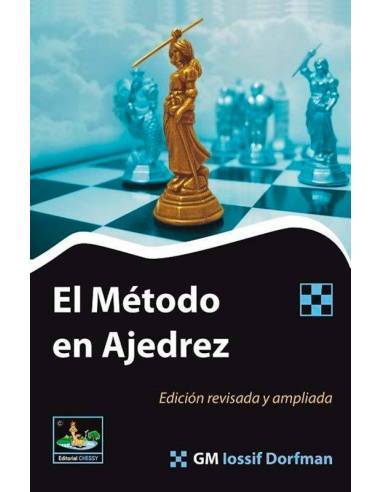 Dorfman's work is surprising in its clarity, establishing the critical moment of a given position and reasoning the way to change a situation favorably, two of the keys to Dorfman's Method.

The prestigious Russian-born French coach Iossif Dorfman, who was part of Kasparov's team of analysts in four matches for the World Championship, and trained Beliavsky (1980-82), Bacrot (1993-1997) and Topalov (1998) reveals us in this work and in The Critical Moment –also published by Editorial Chessy– his original Chess teaching method, a novel approach that has become a central piece of modern strategic thinking.

Dorfman's work is surprising in its clarity, establishing the critical moment of a given position and reasoning the way to change a situation favorably, two of the keys to Dorfman's Method.

With his deep pedagogical approach, the author wants to show new perspectives so that the reader can progress towards mastery.

The Chess Method analyzes in depth the concepts of Statics and Dynamics in Chess.

This edition has been completely revised with respect to the one published in 2005, and we have added new chapters that will allow the reader a better understanding of the ideas raised.

Dorfman is considered one of the best coaches in the world (along with Dvoretsky, Mikhalchishin and Aagaard). His only two works (the continuation of this work is The Critical Moment) have been translated into almost all languages ​​and have received excellent reviews internationally.

Also note that he has taken part in the preparation of Polugaievsky, Gelfand and Topalov for their most outstanding matches. As a player he has been a member of the French national team from 1990 to 2004. He has also been part of the Soviet national team.