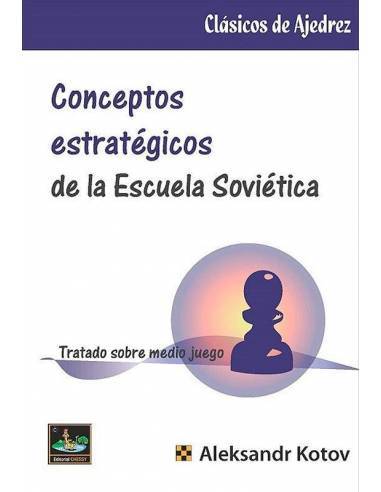 Strategic concepts of the Soviet School

This new Kotov book, unpublished in Spanish, is actually a general strategy manual, where many strategic concepts can be accommodated.

Aleksandr Kotov is a reference of the so-called Soviet School of chess, apart from having been a candidate for the world title twice and champion of the Soviet Union. His books and his method of training are still valid today.

This new Kotov book, unpublished in Spanish, is actually a general strategy manual, where many strategic concepts can be accommodated. One speaks, for example, of the important role played by the pawns in a game and of the possible scenarios of development of the events determined by the structure of the central pawns.

Kotov also analyzes the different cases of transfer of the fight from one flank to another and from the center to a flank, and also examines examples of the slow fight in the attack on both flanks. Of course, it also addresses the ability to see the important nuances of the position, assess it and act accordingly, following a previously projected plan.

The lessons of Kotov are reinforced with the analysis of games of the best masters (93 games in total), which have a deep strategic content. And among them are offered lots of Karpov, Botvinnik, Kotov himself and other greats like Fischer, Spassky, Petrosian, Keres, Smyslov and Alekhine.

Concepts such as "simple positions" are not usually found in the works of other authors. He also explains very well what he calls "the fourth phase of the game of chess", the finals with ladies and towers, which combine the methods of an endgame with the possibility of an attack on the king, which belongs to the middlegame.