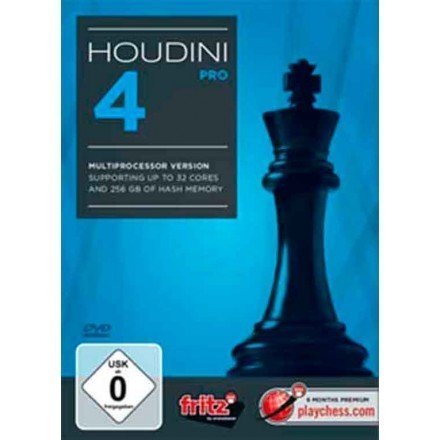 By buying this product you can collect up to 6 loyalty points. Your cart will total 6 points that can be converted into a voucher of 1,80 €.

* The program will be downloaded and paid in the store Chessbase.

Follow the link, send proof of purchase and we'll give you a voucher of 10% of the amount paid Chessbase, to buy in our store.

Houdini is unquestioned number one! The module, written by the Belgian Robert Houdart, is known for finding traps and resources in positions that can not be deciphered by other modules. Now, with the launch of its latest reincarnation, Houdini module 4 has been improved significantly. Its 50 Elo points in playing strength represent almost double the performance analysis and duels modules.

A significant element of the new version is the ability to use end Syzygy bases, including a full analysis of all the final pieces to 6 *. Houdini 4 was developed taking into account compatibility and has been tuned to work with this ultramodern format tablebases to offer the optimum in terms of accuracy and strength in the final.

Houdini 4 also offers all the virtues and elements that made its predecessor popular program analysis in the chess world, but now also uses a highly accurate valuation functions that are directly correlated with the expectations of victory in a module position concrete. In addition, the improved tactical mode makes Houdini 4 to be the best chess problem solver of all time.

Houdini 4 comes with the latest Deep Fritz 14 GUI and also offers all the features and functions including training and analysis standard on Deep Fritz 14.

My best games in the Ruy Lopez downloadable
24,79 €
Quick View
Add to compare

How to play the Najdorf vol.2 downloadable
24,79 €
Quick View
Add to compare