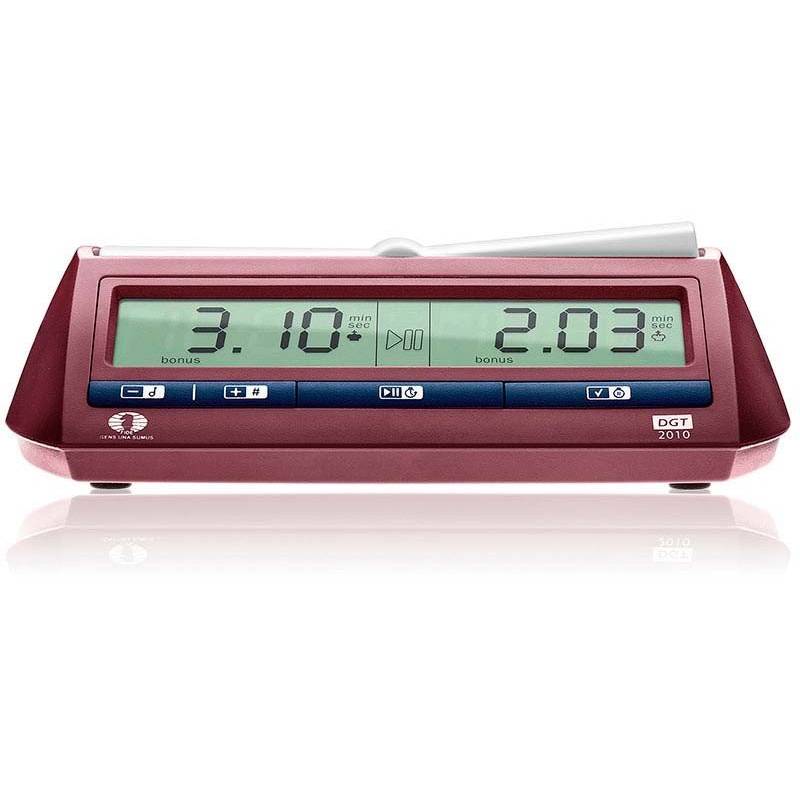 The DGT 2010 digital clock is the most widely used in the chess world. It was declared an official FIDE watch and is used in most tournaments around the world. Its large screen, ease of use, various time controls and the ability to manually store up to 14 game programs make it the perfect digital chess clock.

The DGT2010 digital clock is the official chess clock of the International Chess Federation FIDE.

Its first version was manufactured in 2007. A year later, in 2008, it was named as the Official FIDE Chess Clock, after a test carried out by four top level referees who considered that it complied perfectly with all regulations. FIDE officers.

At present, DGT 2010 continues to be the most widely used digital clock in professional and amateur chess, being commonly used in exhibition chess games, in chess clubs, in official tournaments or of any kind. The massive use of this digital chess clock is given by its economic price, its ease of use, its different programs and its high efficiency.

After a first version, the DGT 2010SG (Second Generation) was released with some new features and a few changes to improve its performance, options and adjustments to comply with FIDE standards and the most popular game rhythms. Today it is without a doubt the best-selling chess clock, with nearly 300,000 units sold worldwide.

It consists of a large screen divided into two parts, corresponding to each of the players on the game board. In each part of the screen we will see the remaining playing time of each player. We can also visualize:

At the top we have two buttons or levers as a "scale" that are used by each of the players. When a player makes his move, he presses the corresponding lever, stopping his time and ending his turn. The opposing button rises as the opponent's time starts running automatically.

In addition to the two main game buttons, the DGT 2010 chess clock has other buttons that allow you to control all its functionalities:

As for the game options, with this watch we can play both chess and other well-known board games such as Shogi, Scrabble, GO or checkers. As for the chess options, it has everything you need to control the timing of the different existing game rhythms.

We can introduce up to 14 manual programs that we can save to use whenever we want. In addition, it offers 13 different methods to control the time of the games: fast and Blitz, period + guillotine, options with increase and delay, increase in tournament, etc. Plus, it includes 21 pre-programmed options for quick and easy use. You can also correct the game time or number of plays in real time, pause the game or activate / deactivate a sound effect for the time trouble.

It works with 2 AA batteries (included) with great efficiency that can last up to 10 years. In case the batteries are running low, an indicator will appear on the screen so that you can change them as soon as possible. It is recommended to use low consumption disposable alkaline batteries.

For more details on each time control method, scheduling options, and other issues regarding DGT 2010, see the official manual.

See a review on our blog.

See a review in our blog.