Revista Capakhine nº 8. Half for children half for parents

The lovers of the openings of attack chess will enjoy much with this gambit that proposes our director, and that although it is quite ancient, still in our times great strong masters employ eventually. A great opportunity to incorporate in our repertoire a surprising and aggressive gambit, to fight for the initiative from the first plays. This chess opening contains different tricks that are sure to appeal to you.

If in the previous number the G.M. Enrique Rodríguez initiated us in the first concepts and strategies related to the isolated pawn, now brings us closer to the most typical and important of all: the pawn of isolated lady. On this occasion Enrique goes up a little the level to illustrate players of intermediate and advanced level about the fundamental questions and concepts in this type of positions.

TACTICAL SEMAPHORE: COMBINING WITH THE PROMOTION OF PEON. By Manolo Alcover

In this issue we will work with combinations that include pawn promotions, so expert chess monitor Manolo Alcover offers a selection of exercises on this topic. The different problems of chess are divided by levels, so that all children can find exercises appropriate to their chessing.

The Canarian teacher and trainer will be in charge of selecting a very didactic collection of chess finals, which will surely serve the reader to learn some fundamental theoretical ends and to familiarize himself with the typical resources that the final phase of the game offers us. Essential for players who want to progress.

On this occasion, the guest to get on the time machine is the G.M. Àlvar Alonso, who invites us to accompany him to 1910 and discover an instructive game of the World Championship between Lasker and Janowsky. The great Catalan teacher gives a master lesson in chess from an excellent game.

In this new delivery we learn to customize the board and the notation of the items in our databases. Also to include comments on them. Of course we are not only limited to textual comments, but also a review of some useful functions in this regard, such as marking boxes or incorporating small boards that highlight pawn structures or maneuvers of pieces.

"All the kings, the ladies, the bishops, the towers and the horses are very nervous. It's Monday, September 13: first day of school for your children after the summer holidays. Who will be the new class, who will be the teacher or the teacher who will be with them all the year? "" I wish I did not say Lady Marianels! " ... "So begins this new account of the magnificent writer David Vicente, who immerses us in the magical world that creates in his stories.

The World Champions. The extraordinary draftsman Wadalupe continues with the series dedicated to the world champions. This time it is the turn of Mikhail Tal, the Mage of Riga, one of the most brilliant players in the history of chess.

Did you know...? It is always fun to know the anecdotes and curiosities that surround our game, and in this section we love to surprise you.

Tricks and cloaks in the opening. Knowing the typical traps of the first phase of the game is fundamental. It can serve us to win chess games very quickly, but also to avoid that it is our rival that surprises us.

Champions of yesterday and today. In this section we show you the trajectory followed by some of the best players of the day, who also answer some questions. For this number a guest of luxury, the G.M. David Anton. 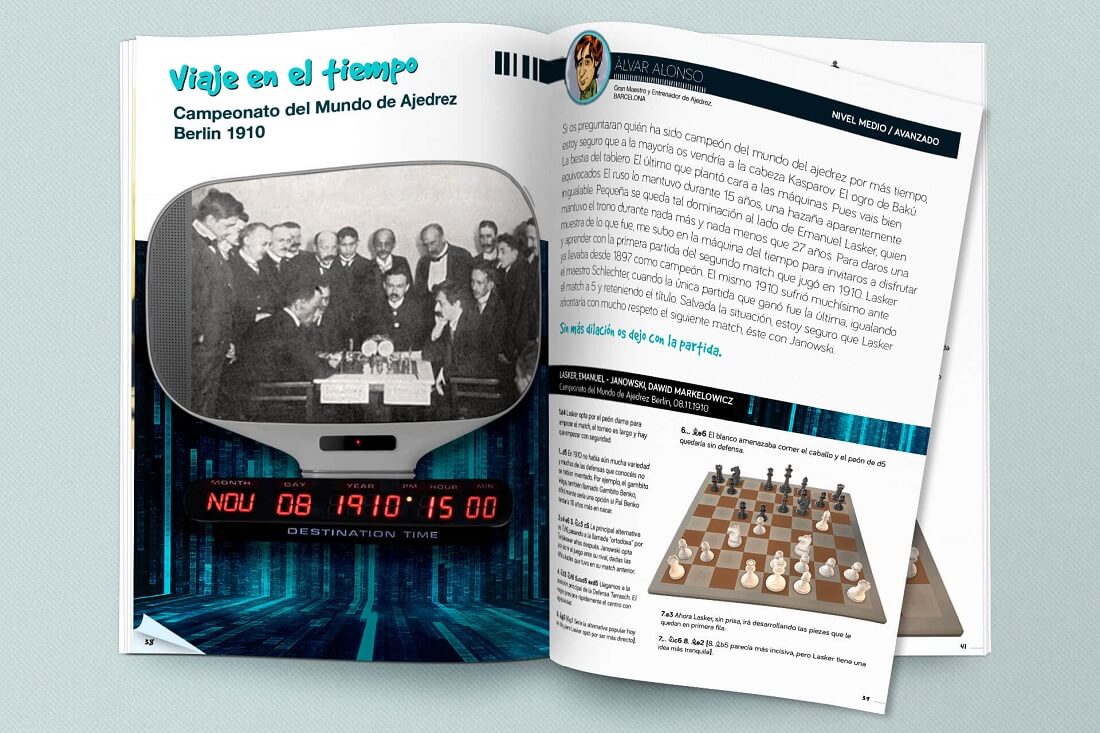 If there is a Spanish author of reference in the specialized literature of chess, surely it is Antonio Gude. Few people, moreover, know as much as he does about the history of 20th century chess. Writer, translator and journalist. He was editor of the magazine El Ajedrez and years later director of the magnificent International Journal of Chess. We talked to him about many issues.

Our expert in educational chess, which has just published "The transversality of chess", brings us to a subject of maximum interest: the relationship between chess and emotional intelligence. The article also allows a review of the intellectual capabilities of chess. Another great contribution of our illustrious collaborator.

ASIGNATURA CHESSES IN ... CATALONIA. By Marta Amigó and Josep Serra.

In the previous issue of Capakhine was born this section, in order to inform our readers about how chess is integrated in schools. From Cantabria we travel to Catalonia, so that the leaders of the Catalan Federation of Escacs in the project "Escacs a l'escola" tell us the progress they are making.

WITH SIGNATURE. By Arturo Pérez-Reverte.

It is an immense honor to be able to offer our readers this article by one of the best Spanish writers of today, the academic Arturo Pérez-Reverte. His fondness for chess is well-known and in fact, in one of his novels, The Table of Flanders, our game has a great protagonism. In the section that we started we will offer texts related to the chess, written by great authors. Starting with Arturo Pérez-Reverte is a luxury.

SURVIVAL MANUAL FOR PARENTS OF ADJECTIVES. THE PARENTS UNDER MAGNIFYING. By M.F. Luis Fernández Siles.

What bad habits or awkwardness can the parents of chess players play? A new delivery of this "manual", where in humor key we review some behaviors of the parents and that usually become evident especially during the chess competitions of the children. The "enlightened" father, the suffering mother, the "mathematical" father, the "paranoid" mother and the "demanding" father are the topics we portray.

The Magic Chess Club of Extremadura, which presides over the author of this article, has been working for a long time in penitentiary centers. They are pioneers in social and therapeutic applications of our game. Montero explains to us what chess, and the strategies that can be learned with our game, totally extrapolables to the life, can help to the inmates.

THEMES OF HISTORY OF CHESS. THE SECOND DEATH OF GUZPATARRA. By José Antonio Garzón.

"A genuine and fascinating Spaniard, Gambito Guzpatarra, who impressed the Italian players who visited Spain at the end of the sixteenth century, was destined to reign, to leave its imprint in the following centuries." This is the beginning of this extraordinary research work carried out by one of the world's greatest experts on the history of chess, which invites us to know the curious history of Gambito Guzpatarra.

PSYCHOLOGICAL PREPARATION. GHOSTS ON THE BOARD (2): ELOPHOBIA. By Carlos Martínez Piqueras.

The chess psychologist, Carlos Martínez, continues to talk about the fears that often appear in the mind of the chess player during the competition. This time he talks about how we can affect the Link of our opponent and how we deal with this situation.

REGULATION. THE ARBITRATOR UNDER PRESSURE. By the Referee FIDE Enrique Pescador.

Should the referee act in the same way and with the same rigor in a normal tournament or in a school tournament? There are different opinions on this and this time, our expert referee, develops this topic in an article that hopes to start a rich debate. 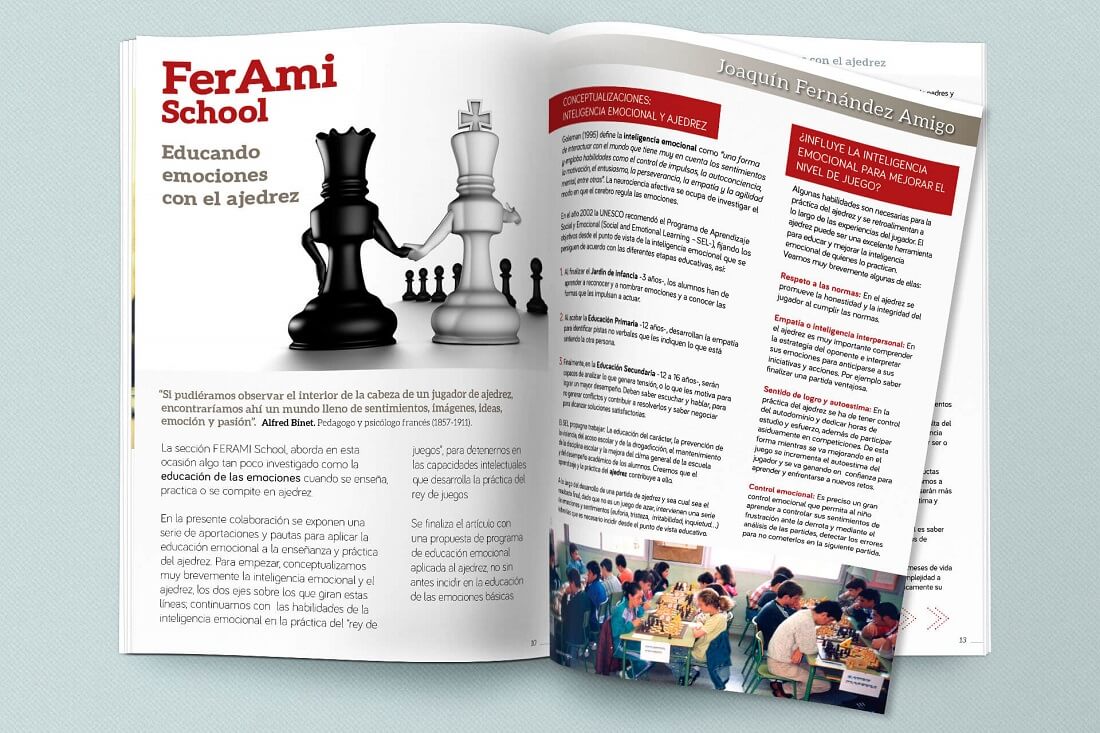